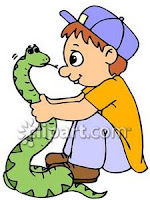 I was reading a new post by Wendy at Are You Breathing (http://www.areyoubreathing.com/2011/04/carmel-valley-california.html) about a visit to a friend of theirs who is a vet with quite a collection of reptiles.  The pictures of her boys' fascination with the snakes reminded me of a story of my own.

Yes, I am occasionally inspired by other blogs that I read.  After all, aren't we all here to connect with and inspire each other?

When Scout Boy was five he went to the birthday party of one of his kindergarten classmates.  This was one of his first parties so he was still at the stage where he wanted me to stay.  There were several other parents that stayed too so that was fine.

(Now, at twelve, he would die a million deaths if I ever stayed at a party.....sigh)

This party took place at their house with video games, a movie, plenty of goodies......you know, the usual.  The unusual part is that they had this huge snake that might as well have been twenty feet long for the chills that it sent up my spine but, in reality, was probably only about two or three feet long.  (Un)Fortunately, the birthday party happened to fall on the day that the snake was due for a feeding so this became a party activity.

The mom took a frozen mouse out and warmed it in the microwave.  Thank goodness it wasn't alive or I might have puked on my shoes!  Once it was ready, she put the snake in an aquarium on the coffee table and called the boys up from the basement.  She told them what she was doing, arranged them on the floor in a circle around the table and put the mouse in the tank.

You have never seen a dozen five/six year old boys THAT quiet for THAT long....... EVER!  They kneeled in around that tank with open-mouthed, wide-eyed fascination for the entire time that it took for the snake to take in that mouse.  Most of us parents sat far back, watching from a distance.  Our stomachs are obviously far more delicate than our offsprings'.

When it was done, my beautiful boy, grinning from ear to ear, eyes shining, came running over to me and said "Mommy, Mommy, it ate the BUM last"  followed by a fit of giggles