Well, yesterday was a big day for my little Drama Queen.  She got her ears pierced.  She's been playing with the idea for about a year now but kept on backing off at the idea that it might hurt.  Her daddy didn't mind this a bit.  You see, she's ten now and the closer she gets to her teen years the more nervous Stinky gets.  The idea of his little girl growing into a young lady gives him hives.  This is no surprise since this is the man who vowed to not let her date until she turned thirty-five back on the day that she was born.

Anyway, a couple of nights ago, she approached me and said that she was ready and wanted to do it.  I could sense a certain firmness to her request that told me she wasn't backing down this time.  I emailed Stinky get his okay and told him to talk it over with his girlfriend/partner SM (I knew she'd be on our side!).  Well we got the green light and the delighted squeal that this news brought almost broke my eardrum!

Waiting until Saturday was out of the question so we trooped over after work on Friday.  Well, what happened was probably the funniest thing that I've seen in ages!  It started out normally enough; the lady let her choose the studs that she wanted, then sat her down to mark the spots with a marker so that the holes would be straight.  Drama Queen was fine through this though she did look kind of nervous.  When the lady came towards her with the piercing tool, she reached out for my hand (damn, how can I take a picture this way!) and her face totally changed.  Her mouth turned down, she went pale and her eyes brimmed with tears.  She was totally still since we told her to be but she looked like she was about to start sobbing as the hand with the tool took aim.

Here's the funny part; as soon as the click was heard, her whole face transformed and she busted out a HUGE smile.  It was like a light switch had been been turned on.  All that nervousness and fear of the unknown had been for nothing and that quick, relatively painless "click" had completely dispelled the clouds in half a second.  The transformation was so fast that both I and the lady doing the piercing burst out laughing at the suddenness.

She grinned through the second piercing and hasn't stopped grinning ever since.  She called her dad and step-mom and gushed the news to them when we got home.  Stinky, being a guy, didn't have too much to say about the whole thing but SM made up for it, sharing her joy and enthusiasm.

Our little girl is growing up so quickly.  We've done the training bra milestone and now the ear piercing one and there are so many more to come.  I think that I'm ready but SM and I may have to drag Stinky along by the ears.  It's worth it so see such happiness. 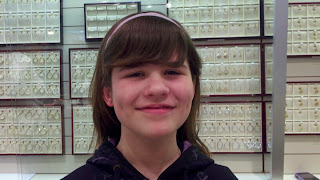