One of Mama Kat's Writing Prompts this week is - list six people or things that deserve to take a time out!  I think that I can handle that  :) 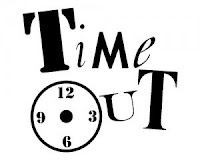 Number one on my list of people or things that deserve to take a time out? Definitely the Kardashians. OMG do we ever need a break from these ever-present, ever-trashy, attention-seeking twits! They are not actresses (unless you count a sex tape) or musicians or anything else that make any significant contribution to society. They are simply celebrities because they are pretty and trashy and so hungry for attention that they are willing to live out their dramas in front of a camera. Enough already!

“Reality TV”, in general, is something that I am so tired of that it’s just ridiculous! I hardly watch the big networks anymore because of this programming. I can’t believe that there are so many people out there willing to make asses of themselves in front of television cameras for the public’s entertainment just to get their fifteen minutes of fame. It’s time to give all of these shows a time out and bring back good programming.

Bad drivers in general need a time out (or perhaps just a refresher driving course). Unfortunately, there are so many of them that the streets would be practically empty if we enforced that. Then again, not such a bad idea…….. The number of drivers who never signal their turns/lane changes, never stop for a cross-walk, don’t know what a side mirror is used for, have no concept of right-of-way, can’t park straight to save their lives and many other daily offences is just staggering.

William and Kate need a time out too; not because I don’t like them cuz let’s face it, they are adorable! They are a beautiful couple who had a beautiful wedding and have now made a beautiful baby together. They now need a time out for THEIR sake. Being new parents is tough on any couple, with people hovering over you, ready with their advice and, yes, criticism. Imagine how tough being a new parent would be living under the microscope of public opinion like they do! So, now that the baby is here and everyone is happy, how about we leave them alone for a bit.

I have given Candy Crush a time out. As a matter of fact, I completely removed it from my Facebook profile. That game was the biggest time-suck I have encountered in a while. There was one level that I was stuck on for so long that it actually had me totally stressed out! I kept going back to it over and over again until I finally beat that sucker. The next time that I got that stuck, I decided that an intervention was needed. You wouldn’t believe my anxiety level when my mouse hovered over that delete button but the relief afterward was reward in itself. Of course now, thanks to my kids’ stepmom, I have discovered Words of Wonder. It begins again……..

Last of all, I am taking a time out.  It's been a busy summer with two soccer schedules and work so there's been a lot of running around.  Soccer ends this weekend and I am on week one of my two week vacation so I'm ending the summer in a quiet way.  I'm going to catch up on some housework that has been ignored (you should see the dust bunnies in this place; scary!!) and do some reading.  We may even catch a movie.  I'm going to use this time out as a time to recharge my batteries calm my mind so that I can go back to work and get the kids back to school refreshed and ready to tackle the world.... at least my corner of it.