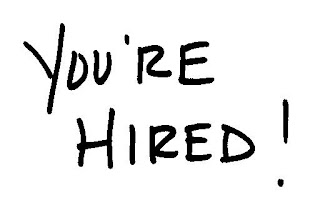 About a month ago, I returned to my desk after lunch and had a good rant about the people who ate lunch around me in the restaurant.  Just in the area that I was in, I saw several people sitting at their tables, in a nice restautant, wearing winter hats and one in a baseball cap.  Were these people raised in barns?!  This post isn't about people in hats though - as interesting as that subject is - I'm just leading you to the rant by my coworker today.

When she returned from lunch, she said that today is her turn for a rant.  She saw someone at Starbucks who got her blood boiling.  DG has worked for us since last March.  She's young (23) and this is her first "office" job.  Before this, she had a job at the mall.

Okay, enough of THAT tangent!

She went to an interview a couple of days before her interview with us.  This is where she met the ass that she spotted today.  Now, she was a young person looking to get her "foot in the door", experience-wise, so I can understand how he might have felt that she wasn't experienced enough for the position he wanted to fill.  He could have explained that he was looking for someone with more experience and wish her luck in her job search - or a version of this.  This is what a nice person would do.  He was not a nice person.  He looked down on her and told her that all she was good enough for was a Walmart greeter job.

Oh My God!!!  Can you believe that?!  This jackass took her hopes, not to mention her self-esteem, and stomped on them.  When we called a day or so later to book an interview with her, she almost didn't take it because she was so low on herself.  I'm SO glad that she didn't follow through with that thought.

We could see right away that she was eager to learn and she had a great attitude so we gave her a chance.  We have never regretted that decision.  She is an absolute dynamo with an appetite for learning new things that just doesn't quit.  I get tired just watching her.  Of course, I'm almost old enough to be her mother so that's not surprising (yeah, that tangent again!).  She absorbs everything that we teach her and takes everything in stride.  I haven't found anything yet that this great chick can't handle.  The fact that she has a great personality and wicked sense of humour totally secures her place in our hearts.

I asked her if she said anything to the jackass but just the sight of him had brought back the hurt feelings and she pretty much had to use her energy just to keep breathing.  Truthfully, he probably doesn't even remember her but his treatment of her still upsets her a year later and will stay with her for a long time.  I told her that she should shove her success up his nose if she sees him again - it may do nothing to change him but it would feel damn good!

I wish that she hadn't had to go through that hurtful experience but his loss was definititely our gain.  My coworkers are my family-away-from-home and I'm glad that we took a chance and invited her to join us.