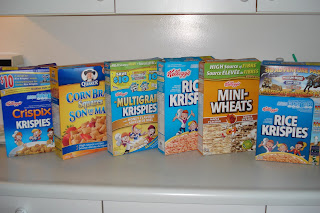 I spent some time scrubbing down my kitchen today and clearing the clutter and came to a realization. I'm now one of them! You see, there was a time (pre-children) that I would go to friends' homes and see cupboards with seven or eight open boxes of cereal and think "why in the world does anyone need that many boxes of cereal?" I thought that it was ridiculous and vowed that I would never be one of "those" mothers.

I started out really well. When my kids were small, I would buy one box of cereal and we would eat that until it was gone and I would buy another. Very sensible of me, right? Well, this went on for a while but, as the kids got a little bigger, they started developing their own likes and dislikes. I held out for a while, making them agree on just one cereal to buy. Eventually though, the bickering got to be too much and I thought to myself "it wouldn't hurt to let them each choose one, would it?". Yes, I talk to myself all the time; it helps the thought process.

Well, my friends, that was the on-ramp to the slippery slope to becoming one of "those" mothers. As you can see in the pic above, I found six open boxes of cereal today, four boxes of which only had about two inches each of cereal in them! After a bit of consolidation, I brought them down to two boxes. I should hear a good amount of squawking from the young ones the next time they pour from those boxes!

My one consolation is the knowledge that I'm not alone. I'm sure that there are many of us; one big, happy, cereal hoarding club. LOL