Back at the beginning of the year, I came across this list of 16 Books To Read Before They Hit Theaters This Year.  Some fo them I had heard of but others were new to me.  I tend to go for mysteries, thrillers and some fantasy/sci-fi but decided to stretch my wings and pick a few books off this list for my own reading list.

The first one that I have read is Jonathan Tropper's This is Where I Leave You. 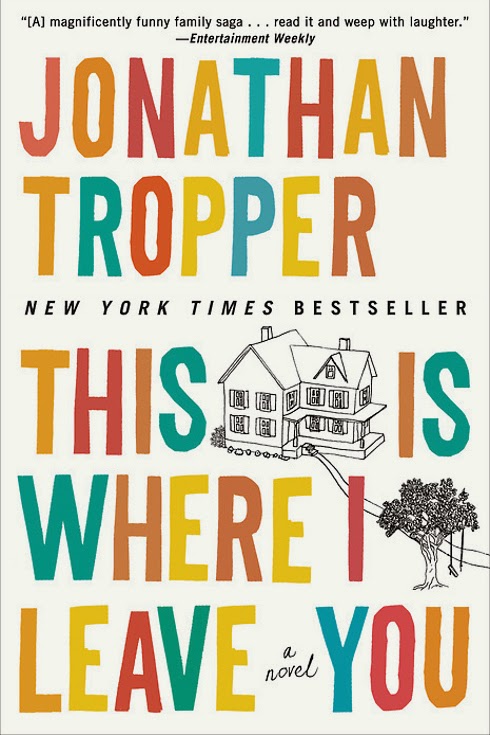 This novel is told from the point of view of Judd Foxman who has come home to sit shiva after his father's death forcing him and his siblings and their spouses to all be in the same house for seven days - something that hasn't happened in years.  The fact that he is newly separated from his wife who he caught cheating with his boss only adds to his distress.

This story makes you laugh, cringe and nod in understanding at the emotions that play out in this sometimes (okay, often) disfunctional family.  The scene where he discovers his wife's infidelity had me both laughing and cringing at the same time. The back of the book says it's about "love, marriage, divorce, family and the ties that bind - whether we like it or not" and I think that it's bang-on.

In the course of a week, the Foxman family probably learn more about themselves and each other than they ever would have in a year on their own.  Some grudges are resolved, secrets learned and many injuries result.

I genuinely enjoyed this book and am glad that I took a chance on an author (and genre) that I otherwise might not have discovered.  I enjoyed it enough that, when I received an emailed newsletter from iRewards (Chapters/Indigo) suggesting his book The Book of Joe, I decided to pick it up.  I'll let you know how that one goes when I get to it.

Just a note, those newsletters with "suggestions" and deals are so totally evil! I keep getting sucked in....