I am part of a Facebook group called BBW Canada.  It is a group for Big Beautiful Women and their admirers.  We trade jokes, ask questions, share information and just plain enjoy ourselves; no judgment or harassment allowed.  The admins of the page are pretty vigilant about removing those whose intentions are not friendly or go against the terms of the page.  It’s sad that, in our society, we still have to worry about judgment and harassment when so many men and women are, shall we say, extra curvy.  You’ll notice that I won’t use the word “fat”. It has become such a derogatory word that it makes you feel bad just thinking it.

I should note that he eventually deleted his post.  I don't think he got the kind of response that he had anticipated.  A couple of us were a bit harsh and questioned his motives, a few more made jokes; he seems to have wanted a place where he could say more "intimate" things.  Maybe he deserved my response...... 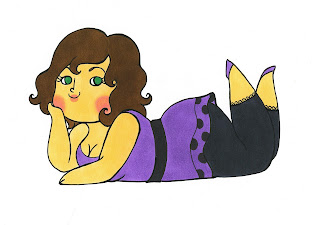 Our society views being attracted to big women as being odd, creepy, even a fetish and those women as being the toys in that fetish.  Do you have any idea how many men I have met who only want a one-night-stand or the occasional hook-up?  Too many!  No dinners in restaurants, no date nights, no meeting their friends or family, no relationship; just “let’s get together at your place”.  Men will approach me online on Facebook or on dating sites, speaking to me far more intimately than any stranger should, expecting me to fall into my place as their sex or cyber-sex toy.  It’s amazing how quickly they disappear when you tell them that you’re looking for more in life than just a good time.  It’s really frustrating and lonely for those of us who don’t want to play the game and refuse to participate.

I said in a recent post that I have been taking a break from dating for a while now.  The disappointments were just getting to be too much.  That being said, the loneliness is starting to get to me and I may just try to put myself out there again soon and see if there are any fish out there worth catching.  I do know that I’ll have to wade through a lot of chum to find a good one though.  There must be a man who lives in my area who is interested in a real relationship with a decent looking woman (if I do say so myself) who is smart, funny, loving, responsible, well-read, passionate,….... oh, and has very well-padded curves.

Until that man comes along, while a bit lonely, I will get along without him.  I have been working on making my life better than it has been by doing things like getting out more, managing my money better, getting back to blogging and trying to eat better.  I am self-reliant woman and capable of taking care of and amusing myself (take that assertion any way you want!) without help although a partner would make life just “that” much sweeter